Notice: Function add_theme_support( 'html5' ) was called incorrectly. You need to pass an array of types. Please see Debugging in WordPress for more information. (This message was added in version 3.6.1.) in /home/grttekoy8joq/public_html/beeindc.com/wp-includes/functions.php on line 5831
 My D.C. Baby Shower Weekend | Bee in DC

Hope everyone’s week is off to a good start. We had a busy weekend this past weekend (though it seems like all of our weekends have been busy and will continue to be busy as we lead up to Ava’s arrival. :-)).

On Saturday, my mom and two dear friends of mine threw Ava and me our D.C. baby shower. It was so lovely and wonderful, but before I gush even more, let me back up to Friday night. My mother-in-law, Norma, and one of my sisters-in-law, Christy, flew in from Maine for the shower. While Tommy was on airport pick-up duty that evening, I came home right after work to get dinner together so they would have a hot, delicious meal waiting for them once they arrived at our house. I also continued doing some light cleaning I began the night before.

1) Slow Cooker Greek Chicken (which I totally had cooking while we were at work during the day on Friday).

3) Greek Salad that I threw together – cucumbers, tomatoes, red onions, and Feta cheese

Needless to say everyone was famished by the time they arrived since their flight ended up being delayed by 45 minutes or so (even including yours truly who snuck in a pasta snack while waiting for them to come home!) We spent the rest of the night eating and chatting. We also showed Norma and Christy Ava’s nursery that is currently in progress before we all turned in for the night. (Tommy’s favorite part of the tour is commenting on how Ava has a walk-in closet even before she is alive and how she has more clothes in her closest than he does in his own walk-in closet). We had a big day ahead of us!

On Saturday morning we were all up and moving by 7am – drinking our cups of coffee, letting Ms. V out into the yard and giving her breakfast, and getting dolled up for the shower. We ALL allowed time for a snuggle session on the bed Norma and Christy shared the night before, with Violet being the star of the show – of course. Tommy was taking the ladies to my mom’s condo (the shower was being held in her condo’s party room) a little bit earlier to help set-up. I would come along an hour or so later.

Once I arrived at the shower my jaw dropped a little. Like I said earlier, all the co-hosts had done such a fantastic job! I was so touched because the party room clearly showed how much time and effort had been put into making this shower a success.

The theme of the shower was “fairies” since that is what Ava’s general nursery theme is.

Fairy cupcakes that one of the co-hosts, Liz, had ordered.

One of the two baby shower games: Guess the Baby Food!

Guests were asked to write sweet, encouraging messages to Tommy and me on diapers for Ava. You know, to get us through the late-night changings. 🙂

Super cute mason jars Liz had decorated for the lemonade and mimosas. 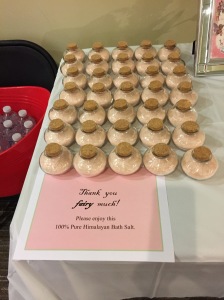 “Fairy Dust” bath salt party favors that Allison, the other co-host, had been in charge of.

One of the things my mom was in charge of was decorations for the shower and as you can see from the photos, she went all out! 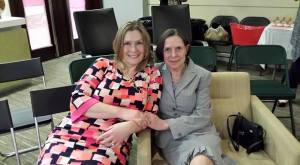 I will say, Ava is one blessed kid. She got so many great things at the shower.

The food spread was amazing. Liz had Maggiano’s Little Italy cater lasagna and a white chicken and mushroom pasta, while Allison made a scrumptious seafood pasta. Mom made her famous fish dip and artichoke dip and had put together a fruit salad and veggie tray. In addition to Fairy cupcakes for sweets, Liz’s mom graciously made chocolate cookies and lemon bars as well. Needless to say all the baby shower attendees were well fed and hydrated. 🙂 Allison was a doll and made sure there was a bottle of nonalcoholic champagne for me to sip on. I didn’t even know that existed!

I had the most fun at the shower and was so touched by everything and everyone – from my amazing co-hosts, to all my friends and co-workers (past and present) that took time out of their busy schedules to celebrate with me. It was such a great day.

Later that night, we met up with Tommy. He and I were treating my mom, Norma and Christy to dinner at the Chesapeake Room. We got a great table, a fun waiter, and all of our drink, appetizer, and entree choices were spot on.

(Christy) and I ordered the Pan Seared Scallops over Risotto. Delish!

After our nice leisurely dinner we parted ways with my mom and headed back to Chesapeake Beach. We all were fat, happy, and tired. 🙂

The next morning we said our good-byes to Norma and Christy in the early morning since they had a 10am flight back to Maine. While Tommy did another airport run, I stayed with Violet and began putting away all of Ava’s new found treasures and continued rearranging and preparing the nursery.

The rest of our Sunday was pretty low-key. Tommy worked on a lab for his graduate school class, while I rotated my time with Ava’s nursery, household chores, TV time, reading, Violet time, eating, napping, and chatting on the phone.