Who is ready to give 2015 a go? I know Tommy and I are. 🙂 I hope 2015 brings you love, happiness, joy, accomplishments, good health and reflection.

Our New Year’s Eve plans consisted of going to one of our neighbor’s houses for a few hours who was hosting a NYE party + a birthday party since the husband’s birthday is today. We were home in time to watch the Times Square ball drop with our sweet Violet and Tommy and I shared a private, intimate toast and NYE smooch – champagne for Tommy and sparkling cider for yours truly.

The wife who hosted the NYE and birthday party we went to had a fun tradition that I really liked. Writing your New Year’s resolution on your glass you drank out of for your toast.

Let’s travel back in time again, shall we?

Our second full day in Prague included a day trip outside of Prague. One of Tommy’s only requests of the entire trip was being able to see a little of the Czech Republic “countryside”.  After asking people who had been here before and doing some research of my own it became clear that we should take a day trip to a town called Kutna Hora to see the Ossuary with human bones in it. Yep – you read that right.

But first the morning began with mom and I waking up a little early to squeeze in a light workout at the hotel gym (which was, I hate to say, a poor excuse for a gym considering we were staying in a 5 star hotel. It was just so tiny and the equipment minimal. We made the most of our workout – mom ran on the treadmill and I did an elliptical workout). After we had raised our heart rates a little bit, we collected Tommy from bed and headed to breakfast.

Our tour wasn’t until noon so the three of us took the rest of the morning to walk towards Old Town Square again to window shop again. We dropped Tommy off at a chocolate and coffee shop to put the finishing touches on his paper while we bought a few more souvenirs and gifts for people back home.

Pretty soon we were boarding our shuttle to make the hour and some change drive to Kutna Hora. We lucked out in terms of our tour – besides the three of us there was only one other person on our tour, a woman from southern California who we immediately became friendly with + our tour guide and driver.

Kutna Hora is a small city situated in the Central Bohemian Region of Bohemia, which is now part of the Czech Republic. As we learned on our tour the city competed with Prague from the 13th to the 16th centuries economically, culturally, and socially. I will mention two examples of this a little later. Since 1995 the city center has been a UNESCO World Heritage Site.

Perhaps the main highlight in Kunta Hora is the Sedlec Ossuary or quite simply to tourists, the Church of Bones. The church is nothing spectacular on the outside, but once inside visitors will find that the church is decorated by more than 40,000 human skeletons.

The big chandelier of bones hanging from the ceiling.

The coat of arms of the Schwarzenberg family made of bones. 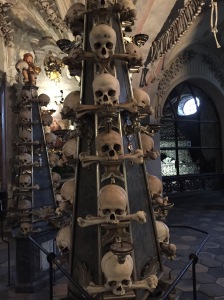 As mentioned on the ossuary’s website here, bones began coming to the church  1278 when the King of Bohemia sent the abbot of the Sedlec Cistercian Monastery to Jerusalem. When the abbot came back he brought with himself a jar of soil from the Golgotha, that was known as the “Holy Soil”. Soon people from all over the places desired to be buried in Sedlec, thus the cemetery there had to be expanded. In the 15th century a Gothic church was built near the cemetery and its basement was used as an ossuary. The bones stayed there for centuries till 1870 when a woodcarver named Frantisek Rint was appointed to place the bones in order. The result was impressively shocking. 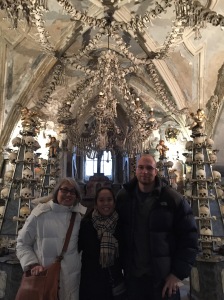 Next stop on the tour was St. Barbara’s Cathedral, a Roman Catholic Church. It is one of the most famous Gothic churches in central Europe and it is a UNESCO world heritage site. St Barbara’s Cathedral is modeled after St. Vitus Cathedral in Prague – the largest cathedral there. The rationale being if Prague had a majestic and beautiful cathedral so should Kutna Hora. (Remember how I said Kutna Hora competed with Prague way back when)? 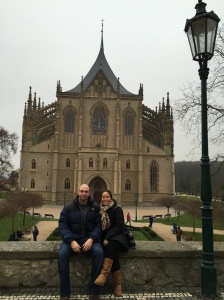 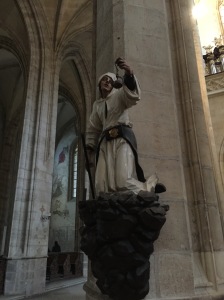 After walking through the cathedral we began making our way to Kutna Hora’s city center. 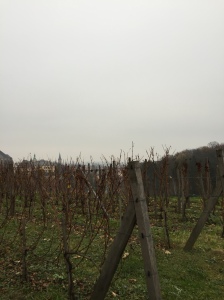 A small vineyard along a bridge that led to the city center. 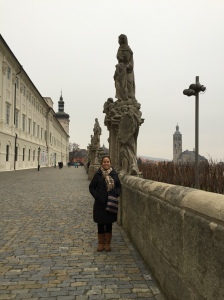 This bridge was designed to look like the Charles Bridge in Prague.

Views of Kutna Hora from our walk.

Once we were at the city center we took a tour of the Italian Court and Royal Mint of Kutna Hora and popped into a local cafe for some warm drinks and snacks before piling back onto our shuttle to head back to Prague. Our tour mate gave us the recommendation of going to dinner at a Czech pub that night, Cafe Miljenjic.  She raved about the food and ambiance of the restaurant. We took her advice and were so glad we did.

This.place.was.amazing. So amazing we came back another night for dinner again!

Mom having a grand old time!

I ordered potato gnocchi with sauerkraut.

Tommy got the traditional Czech goulash in a bread bowl.

And a meat dish, lol.

We left the restaurant and ended the day stuffed and happy. 🙂

Taking a breath and reflecting on my blessings and

Our first time at a restaurant since early March.

Have you heard? Both D.C. and Northern Virginia ar