Let me be clear, I loved, loved, loved doing this race! I have every intention of doing the same half marathon next year. This is what us runners walked alongside as we made it to the start of the race. So beautiful!

I mean honestly the race had all the ingredients for a fabulous time – great race destination and wineries galore – but it was more than that. The landscape and scenery were just stunning (you completely forgot you were running 13.1 miles), the route was great in the sense that the “rolling hills” weren’t bad at all, the weather was PERFECT (55-57 degrees), everyone was so friendly and excited to be there, and for the most part the race was very well–organized. My one observation was I found it weird they didn’t do time corrals for the runners. This clogged up the first portion of the race a little bit, which was a little frustrating. Coupled with some people had already started walking 10 minutes into the race and they were in the front. 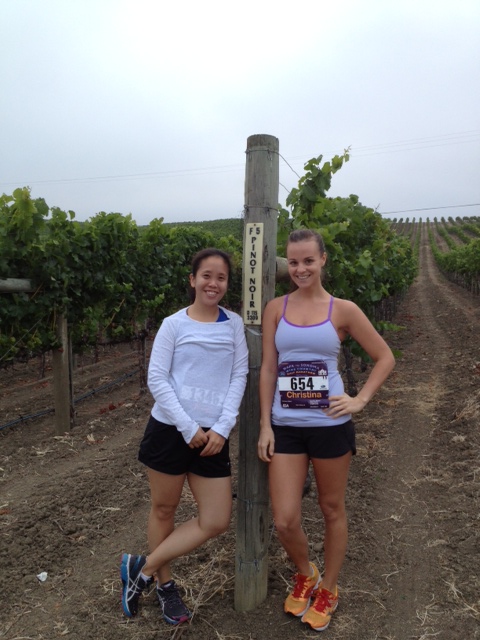 Pre-race photo in the winery where we started the race. 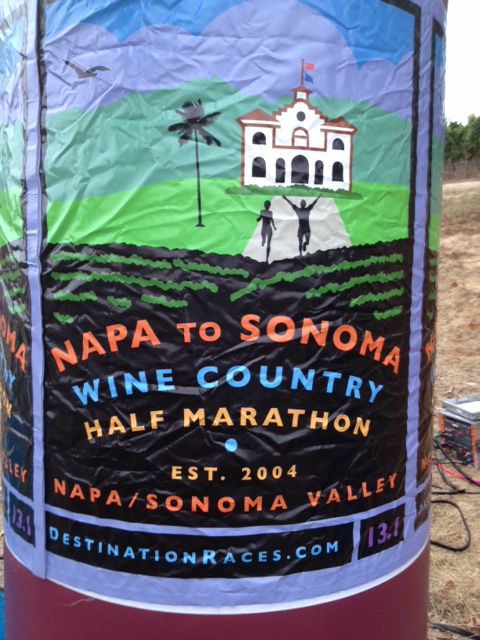 The time had come!

Before the race began Christina and I were feeling great. We had had an amazing night-before-the-race dinner. We had gotten a decent night’s sleep (I tossed and turned a bit, just anxiety and excitement for the race), we had woken up early enough not to feel rushed getting ready and stretched a bit, we had gone to the bathroom one last time before the race started, and we were walking around shaking out our legs and stretching as to keep our muscles warm.

Just like my first half marathon, I honestly didn’t have a set time for this one. Obviously if I beat my first half marathon time that would be awesome, but I still wanted to manage expectations and still do the race just for fun – my only two goals were (again) to run the entire thing without walking and to finish the race. (This was before I saw what the gently rolling hills were like).  However I will say that the words “2 hours” were somewhere in my head as a friend had texted me good luck the night before and urged and cheered that I do it in 2 hours. Christina also excitedly talked that time up. I was adamant with her and myself that I would wait to see how I felt during the run, but would keep it in mind.

The first 5 miles I ran strong and I felt good. I was definitely running a faster mile than I had been in my training (average was probably around 8:30 – 8:50). I had Christina to thank for that as I let her determine our pace. I knew if I felt winded or tired I would certainly stop to slow down, but I felt great running! We coasted along together. By mile 8 I was starting to feel tired, but I trudged on. Somewhere between mile 8 and the finish line I really started to get heavy legs. I was still able to run the entire thing, but I slowed way down (probably anywhere between a 10:10 – 11:00 minute mile). Christina tried her best to energize me and get me to rally and I did in spurts, but I just couldn’t maintain a steady pace. She ended up finishing a couple of minutes before me.

It felt so good to finish the race! I felt fine, but my legs kind of gave out once I crossed the finish line. I had to quickly sit down. I wasn’t feeling dizzy at all, I just needed to sit. So I did and drank lots of water. At the time I was certain I didn’t PR, in fact I thought I had gotten a slower time than my first half marathon, but I was okay with it. I had set out what I wanted to do (no walking and finishing). I also immediately started comparing and contrasting what I had done differently in prepping for my two half marathons.

One: for the Rock ‘N’ Roll half marathon I had eaten a half of a bagel and had a half cup of coffee prior to running. For this race, while I had had something similar to a bagel (a breakfast bar), I decided not to drink coffee to see how I would feel. There is no scientific information to support this, but I tend to be a lady of routine and I do wonder if this may have contributed to my run. Maybe I just needed that extra jolt.

Two: It is very possible I just started out too fast. While it’s good to become speedier in your races, I’m wondering if I should have spaced out my faster pace to carry me through the end.

Three: While Tommy may kill me after reading this, I also realized I had forgotten my inhaler for this race/trip. Truly, truly I didn’t need it. I only get asthma in cold weather (30 degrees and below), so when I am running in this type of weather I always make sure to take a few puffs from my inhaler before any run, no matter how I am feeling. I wasn’t having any trouble breathing before the race or after it, so I really don’t think this was a factor. The air was so fresh and clean out in wine country.

While I still will keep these two (three) factors in the back of my head, it turns out I ended up shaving some time off my first half marathon time -albeit by 41 seconds, but still. 🙂 So I PR-ed for this race which is awesome. I will still take these two observations with me to my next half marathon. I will also make sure to do more speed training runs. 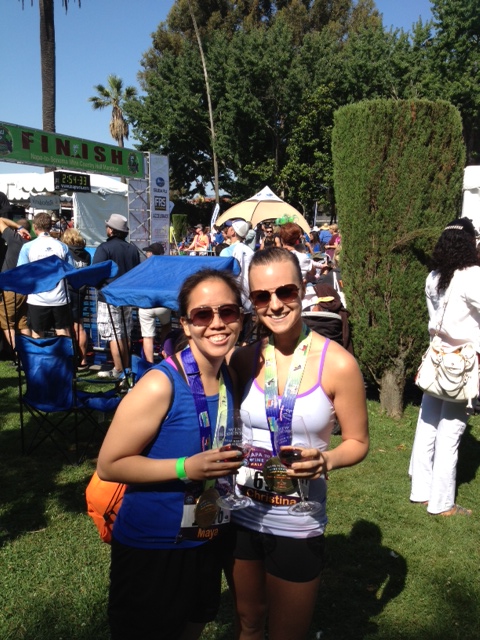 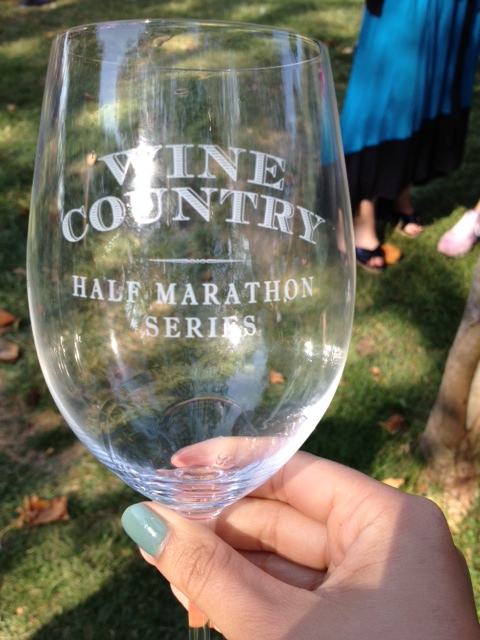 The wine glass each race participant received after completing the race.

So here is to another fabulous half marathon and here is to my crossing a race off my “Half Marathons I Would Like to Run” list!

One of my highlights this week was taking a virtua

This gal gave us quite the scare last week. So gla

Typical Maya fashion - back from a trip and now ca

And our special time with Auntie Christy (or Aunti